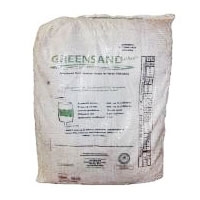 The manganese dioxide coated surface of GreensandPlus™ acts as a catalyst in the oxidation reduction reaction of iron and manganese.

The silica sand core of GreensandPlus™ allows it to withstand waters that are low in silica, TDS and hardness without breakdown.

Systems may be designed using either vertical or horizontal pressure filters, as well as gravity filters.

GreensandPlus™ is a proven technology for iron, manganese, hydrogen sulfide, arsenic and radium removal. Unlike other media, there is no need for extensive preconditioning of filter media or lengthy startup periods during which required water quality may not be met.

GreensandPlus™ is an exact replacement for manganese greensand. It can be used in CO or IR applications and requires no changes in backwash rate or times or chemical feeds.

GreensandPlus™ has a manganese dioxide coating which creates a highly oxidative environment. When a strong oxidant is injected in the raw water stream ahead of a GreensandPlus™ filter, soluble iron and manganese are easily oxidized and the precipitates are trapped by the media (which acts as a catalyst and does not participate in the reaction). The filter is subsequently backwashed and reused, therefore it is not sacrificed in this process.
Hydrogen Sulfide Removal

GreensandPlus™ directly oxidizes sulfide and catalyzes the oxidation reaction. Increased run length and service life of GreensandPlus™ may be realized by pre-feeding a solution of chlorine-containing compounds.
Arsenic Removal

GreensandPlus™ can be used to remove arsenic from ground water in the presence of iron. Chlorine must be pre-injected to oxidize the iron and convert arsenite to arsenate and keep the media regenerated.

Arsenic combines with oxidized iron and is filtered out in the media. If there is not a sufficient amount of iron present in the raw water, then an iron salt such as ferric chloride can be pre‑injected.

A general guideline is 1 mg/L of iron to remove 20 µg/L of arsenic. This can vary greatly depending on pH, silica, and other competing ions in the water.
Radium Removal

GreensandPlus™ can be used to remove radium from ground water in the presence of manganese, in a similar manner to arsenic removal. In the case of radium, manganese in the raw water is necessary.

If there is not a sufficient amount of manganese present, then manganese sources such as manganous sulfate can be pre‑injected.